Savills, attracted the largest attendance so far this season." /> 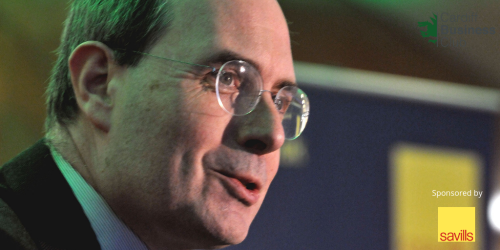 On Monday 5th November, Cardiff Business Club welcomed the Chairman of Legal & General, Sir John Kingman, to the Hilton hotel. The event, sponsored by Savills, attracted the largest attendance so far this season.

From Co-Head of the Financial Institutions Group at Rothschild, Sir John moved to become the Second Permanent Secretary in 2012. It was his response to the financial crisis and the subsequent EU referendum four years later that saw Sir John become firmly positioned and widely recognised as  one of the most influential and powerful figures in British banking.

Speaking passionately about Legal & General, Sir John proudly boasts that the company is “one of the largest employers and investors in Cardiff” – a city that is already benefitting from the £600 million investment it has received so far. He said: “I’ve seen for myself the astonishing transformation of central square.”

As well as being “proud to be financing the new Aston Martin factory [producing over] 750 local jobs”, Sir John also expresses potential in developing Cardiff International Airport since the company owns land around it. This, he says, “makes commercial sense for us.”

He adds that they “would not invest like this in London” as there is, referring to Cardiff, “potential for us in places like this”.

Lightly touching on Brexit, in regard to Legal & General, Sir John explains that “L&G is in a slightly different position.

“Historically we are overwhelmingly in the UK and US. We do very little in continental Europe. Compared to our peers, the critical issue for us is what happens to the British economy post-Brexit.”

He added that whilst there is a “huge interest in Sterling liabilities, assets etc., our balance sheet will be affected by the path of the economy through this process.”

On the matter of UK Research and Innovation, Sir John describes how since being launched in April 2018, the UK government currently spends £6 billion on various support for science and innovation.

Describing their recent successes, the active building centre in Swansea and IEC funding, Sir John expects “we will do a fair amount more in Wales”. He added: ‘Statistics are challenging [and] although Wales currently wins 3.1% of UK research funding, there are fewer and smaller applications from Welsh companies.” This is something he is keen to rectify.

Indeed, Sir John explained how “it’s all to play for. We would really like to work with Welsh technology businesses and universities”.  There are, he said, “really exciting opportunities and pockets of excellence that we can back”.

Humbly admitting that “the [application] processes may or may not be perfect”, what they are trying to do is look for early stage developments using technology that are going to be commercially successful. He suggested that “If an application [is] refused, pick up the phone; they are willing to talk about it. It’s not a closed process, human beings make judgements”.

Finally, in speaking about the types of innovations which largely impact Legal & General, Sir John modestly says “we would like to think we are brilliant, but our business can easily be disrupted by technology.

“Amazon might choose to get into the insurance business, much of our technology is excellent but not all. We spend a great deal of time on that to be ahead of the game. You can get a life insurance quote on the back of the selfie. We have a new app. Like any major business we need to be ready for the possibility that others could beat us.”