The first event of the new 2018-19 Season took place on Monday 24th September, with the Hilton Hotel playing host to over 150 business leaders from across the capital. Addressing the Club was the former Shadow Secretary of State for Education and current Director of the Victoria & Albert (V&A) in London, Dr Tristram Hunt. " /> 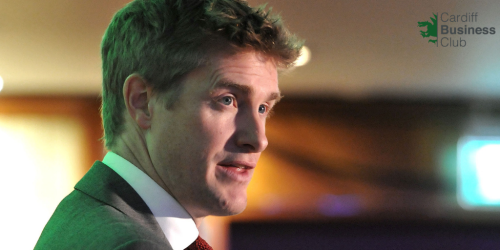 The first event of the new 2018-19 Season took place on Monday 24th September, with the Hilton Hotel playing host to over 150 business leaders from across the capital. Addressing the Club was the former Shadow Secretary of State for Education and current Director of the Victoria & Albert (V&A) in London, Dr Tristram Hunt.

Before taking to the stage, Dr Hunt spent a few moments to be interviewed by Kara Buffrey from Clearly PR & Marketing Communications on behalf of the Club.

Here’s what he had to say:

You spoke to the New York Times Art Leaders Network earlier this year about the overwhelming support for Brexit in your former constituency, Stoke-on-Trent [70% of the city’s voters were Leave supporters]. Why do you think this was?

There was a mix of reasons. Some of them just wanted to give David Cameron a bloody nose after the election as they are predominantly labour voters. There was a bit of ‘stick it to the man’.

In a broader sense of frustration at the current economic model, standards of living and the story of the UKs entry to the European Union also coincided with Stoke-On-Trent’s de-industrialisation – the pottery industry, the steel industry, coal so there had been a decrease in living standards.

They were concerned about immigration and the impact and also strong held beliefs in political and parliamentary sovereignty and the nation becoming themselves. Therefore, it all came together, despite my best efforts to encourage a remain vote.

If there is, as you say, a disconnect between cultural institutions - such as the V&A - and communities outside of London like the Midlands and Wales too, how can you re-engage and forge stronger relations/ties?

Well I do think that national institutions such as the V&A have the responsibility to be as national as possible and you can do this through many ways. One is to lend as many of your objects and artefacts as possible across the country, sharing the collections.

What we do at the V&A is try and focus on education and we are particularly working on supporting the new design and technology GCSE in communities in Coventry, Blackburn, Sheffield, Stoke, Sunderland. Key stage 4 students are now benefitting from the V&A in terms of professional development of their teachers and access to objects and artefacts.

There are lots of mechanisms to do it, we in the V&A have a strong focus on education and that will be the way we seek to achieve it.

You took some criticism when it was announced you were to step down in your role as an MP and take up your current position. Your political background may not follow the tradition of those who occupied the position before you, but does that matter? What advantage does your previous experience both in politics and as a former Trustee of the Heritage Lottery Fund bring to the role?

I didn’t have a tradition museological background. I had been a historian of the 19th century which was when the South Kensington V&A came into being, so I understood the cultural and urban history which gave rise to the V&A. I think I have a good understanding of Urban cultural history so there was an understanding to the collection which was useful.

I represented Stoke on Trent - the Potteries. And if you go to the V&A, go to the sixth floor, stand on the marble staircase and you will see a lot of Stoke-On-Trent in South Kensington.

More particularly our work with many others to try and save the Wedgwood collections. I’m hoping that staff found somebody with an interest in the collections and with some level of education, as a doctor of Cambridge, some kind of professional academic qualification. And someone with a passion for decorative and applied arts along with some of the skills that I bought from politics.

In terms of building coalitions, advocacy and my connections with government, funding. All those kinds of elements which came together.

The issue of diversity and inclusion has made its way to the top of the organisational agenda. Earlier this year, we interviewed Vikki Heywood CBE, Chair of the Royal Society of Arts and former Executive Director of the RSC. She said that: "Holding a mirror up to the rest of society is part of what arts organisations are very proud of." Adding that efforts are being made to address the gender and diversity balance within the cultural industries. How do you see it and what, in your view, can and should be done to address the diversity in leadership issue in museum leadership?

I think it works at multiple levels. We are a predominantly female work force at the V&A and many museums are, it’s a very female-influenced sector, which is excellent. The challenge is at the senior managerial level, but if I think of our executive board, actually we are pretty 50/50 in terms of a gender split. I think in senior curators too.

Opening up the pathways, thinking about different ways of working in the sector are really important. Whether that’s in terms of apprentice pathways, supporting young people from a really early stage, by bringing them into museums. Making sure that museums feel inviting, open and accessible places that are owned by the public.

Also making sure that exhibitions, displays, volunteers, guides reflect the community is really important as a pathway to getting to the point of the senior positions reflecting modern Britain.

The good news is that 47% of students that come for our school’s programme in the V&A are from minority ethnic backgrounds. There are areas that we have achieved quite a lot and hopefully that can inspire people to come to museums.

Tonight’s audience will be made up of senior business leaders and those making their way up the career ladder. Of all you have achieved and learned during your career to date, what one piece of advice would you give to someone either moving into a leadership position for the first time or one who is looking to become a better leader?

I think always take the meeting, you never know what’s going to come out of the meeting. There are meetings that seem like a waste of time, but so much can come from them.

Revealing doubt is not a problem. I think in big organisations like the V&A, we do consider ourselves a team helping to run a big £80 million-pound turnover, 1000 personnel organisation and so you can’t do that on your own.

If you seek to do that on your own, you can absolutely bottle up the organisation. With that ultimately the most important thing is that mission of duty. What the institution or organisation is there for and why.

The V&A museum Dundee branch has just recently opened and is attracting rave reviews. How do you see the future of V&A, would you like to see a national roll out to major cities across the UK? Perhaps Wales…

We’ve got a place in South Kensington, the mother ship, the museum of childhood in Bethnal Green, we have V&A Dundee, we have two galleries at the moment in China and we are about to make a big footprint in Stratford on the Queen Elizabeth park for a collections and research centre.

So, we have got an awful, awful lot on our plate at the moment and I think there’s such a quality and pride; the national museums of Wales, Cardiff Castle. The incredible range of cultural institutions from Swansea up to Anglesey it’s not an area where you would say ‘the V&A knows how to do this’. The more we can partner, support, collaborate the better.

I think the idea that ‘London knows best and knows what communities want’ feels very old fashioned now and we are delighted with V&A Dundee because it isn’t a franchise. It’s owned and run in Dundee and is part of a partnership.

I think we have enough on our plate at the moment.