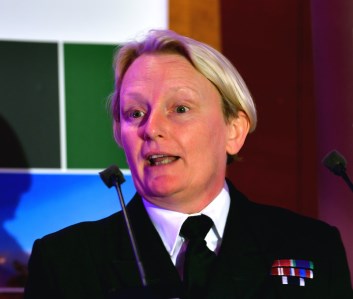 Admiral Jude Terry OBE has addressed Cardiff Business Club members about the growing diversity within the Royal Navy and her ambitions to further develop inclusivity as well as increase welfare support for sailors and their families.

Admiral Terry, who assumed the role of Director of People and Training and Naval Secretary in January 2022, spoke to guests at the Cardiff Hilton Hotel (April 6) during the club’s latest live speaker event. When Jude joined the Royal Navy in September 1997, women had only been allowed on board navy vessels as full members of the crew for six years. Now, 25 years later, around 10% of Royal Navy personnel are female, a figure which has increased almost every year, and is anticipated to increase even further. In February this year, the Navy launched its Race Diversity Network which will support its diverse membership and support the services’ mission to promote an inclusive culture.

Jude, who was appointed an Officer of the Order of the British Empire (OBE) in the 2017 New Year Honours, said: “When I joined the Navy in 1997, women had only recently been allowed to sea, now of course, it is completely open to women and the number of female recruits is steadily rising. The Navy genuinely doesn't look at people’s gender and is an equal opportunities employer. In my role as Director of People and Training, I am determined to increase the diversity of our recruits. While we don’t have targets, I think it is so important to have people of all walks of life so we can learn from each other.”

Admiral Terry also talked about COVID and the repercussions of the pandemic on the forces. She said: “The pandemic gave people an opportunity to spend more time with family, and I am trying to figure out how to embrace that family time with sending people to sea for up to 10 months. It is not a simple problem to solve, and it’s an area the Navy has struggled with, but I am determined to ensure family life is more considered going forward.

“The future of the Navy is exciting.”