The season so far... 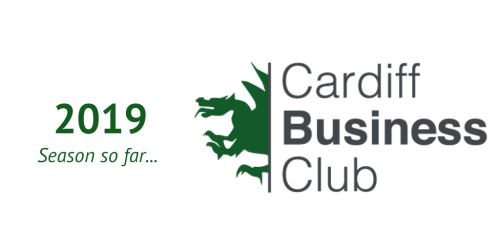 The 2019/20 season started off strong with great attendance to our Season Launch party. It was fantastic to see so many new faces showing their interest in the Club and lots of returning members continuing to show their support.

The evening consisted of welcome drinks and some delicious canapés before Scott took to the podium to launch the next season. A short presentation showcased this season’s speakers and we also took this opportunity to thank our corporate members for their ongoing support.

At the first event of the new season, we welcomed Peter Griffiths OBE, former CEO of Sainsbury’s Bank. He spoke about the evolution of the financial industry since the last recession. In doing this, he discussed the innovative emergence of challenger banks and the threats they may pose to traditional banks.

Peter’s advice to other leaders: “The greatest poverty is the poverty of our own imagination.”

As we stepped into Autumn, the Club was delighted to introduce Warren East, CEO of Rolls-Royce Plc, to address the crowd. During Warren’s refreshingly honest and to-the-point speech, he spoke around his stance on various environmental issues, gender diversity and emerging technology within the engineering sector.

Warren’s advice to other leaders: “Things get done by doing.”

Unfortunately, our November event with Sir Phillip Craven MBE, President of the Olympic Education Commission, was cancelled due to unforeseen circumstances. For those who were interested in attending this event, it will be rescheduled for a date in the near future.

December – Christmas drinks with the Club: A Q&A with Gareth Davies

To end 2019 in true Welsh style, the Club invited Gareth Davies, Chairman of the Welsh Rugby Union, to give a short presentation and Q&A to Cardiff Business Club members. Gareth’s presentation showcased some incredibly interesting facts about this year’s Rugby World Cup event in Japan and gave the Club a sneak peek into future tournaments and what we can expect to see in 2020 and onwards.

For the first half of the season, Cardiff Business Club has hosted some remarkable business leaders, and it doesn’t stop there. 2020 already has a magnificent line-up that includes the likes of Jonathan Lewis - CEO of Captia Plc, Katherine Bennett CBE - Senior Vice President of Airbus and Sir Simon Bollom KCB, CB, FREng - CEO of Defence Equipment and Support. Other speakers will be announced throughout the year.

Don’t miss out on a single update by signing up to the regular Cardiff Business Club newsletter, or join the conversation on Twitter using our #CardiffBusinessClub hashtag.