News > Meet the Board - Paula Morris

Meet the Board - Paula Morris 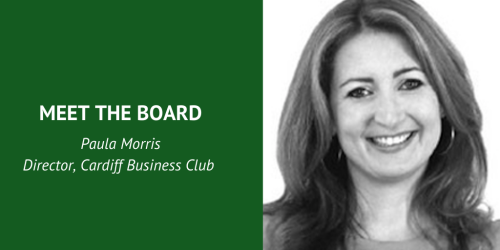 When I heard about the vacancy, I felt passionate about getting involved as it was an opportunity to play a role in adding some value to Cardiff’s business community. Cardiff means a lot to me and I want to be part of its success as a city and a community.

The Club has a rich history and attracts such interesting speakers but was seen as a bit traditional and intimidating by some people. I wanted to help change that and open it up to all.

The Club wanted someone who had a marketing or business development background and who could help them to introduce new members. I saw it as an opportunity to recruit a new generation of members and a more diverse group of people which would better reflect what I saw going on in business locally.

There were several things I felt could be updated and developed to demonstrate that the Club is a welcoming and thriving environment, and I’m pleased to see how far it’s come over the last five years as a result of careful and gradual progress.

I think Cardiff has a real buzz and vibrancy. It feels like a young city where things can get done. It’s obviously very beautiful with lots of green spaces but I think the stand-out thing is the people.

There’s a particular warmth and humour in the Welsh capital which I have never felt to quite the same degree elsewhere. It’s why people with roots in other parts of the UK or overseas are attracted to our city and it’s why we all stay. It gets under your skin and wherever you go, it pulls you back.

I wanted to be various things. Some were more realistic ambitions than others! I spent several years wanting to be an interior designer and a journalist, but only once I’d accepted that a career in ballet was incompatible with my love of chocolate, and I didn’t quite have the voice to front a rock band.

I would finally pass a law to lower the voting age to 16. This would need to go hand-in-hand with political and social issues getting more visibility on the National Curriculum, but I think a well-informed young electorate would be a hugely positive thing for our country.

I remember being very inspired by Lynda Thomas from Macmillan Cancer Support back in 2016. She was so humble, and I loved how she focused on leading by example - what she said stayed with me for a long time.

It was very amusing when Simon Fox from Trinity Mirror showed off his magic skills while speaking last year – I don’t think anyone saw that coming!

I would have a crack at being an MP, though I’m not sure I’d have much patience with the rest of them!

Welsh Cake every time, especially fresh from the oven.

I would choose to be a giraffe because they don’t hurt any other animals and they must have a great view of everything that’s going on from up there!

I’m vegan, so anything that doesn’t involve risotto would be a nice change! I have to say, the alternative meals prepared for my dietary needs are always delicious at Club events.

My ideal menu would be an avocado and tomato salad to start, followed by a cauliflower steak with roasted veg, then something involving coconut and dark chocolate for dessert. I’m hungry now!