News > A year in review

A year in review 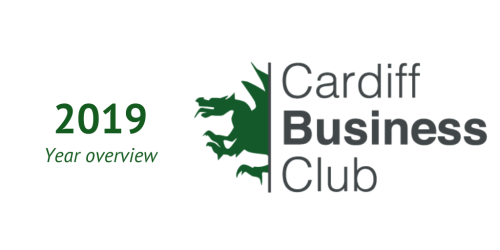 Sometimes it seems that each time we take stock of the season gone by, we err towards reporting this as being one of the finest in the Club’s 100+ year history. It is always a challenge, as one might expect, to constantly find and secure speakers of the calibre our members have become accustomed, but we’re delighted to say that the 2018-2019 season did not disappoint.

Thanks must go to each and everyone sponsor and especially our season sponsors, Odgers Berndtson (Wales) and Cardiff Metropolitan University.

The season kicked off with the former Shadow Secretary of State for Education and current Director of the Victoria & Albert (V&A) in London, Dr Tristram Hunt. He spoke to us about diversity in the arts and how he overcame the doubters when he made the transition from a politician to heading up one of the most well-known and respected cultural institutions in the UK.

Tristram’s advice for other leaders: “Always take the meeting, you never know what’s going to come out of it.”

As we waved goodbye to the glorious summer and welcomed the calm of autumn, October saw Sherry Coutu CBE take to the stage. Heralded by the influential WIRED magazine as one of the most powerful and influential people in tech, Sherry spoke passionately about her commitment to getting more young people – especially girls - interested in STEM subjects in a bid to develop the skills needed for the future. This, she argued, has taken on even greater importance as we loom closer to Brexit and the talent gaps will become increasingly difficult to fill.

Sherry’s advice for other leaders: “Solve a problem worth solving.”

As the Chairman of Legal & General, Sir John spoke openly of the desire to work more closely with organisations in Wales, especially those in the fast-growing tech industries and the principality’s burgeoning higher education sector.

Sir John’s key message: “Like any major business we need to be ready for the possibility that others could beat us.”

From the moment he entered St David’s Hotel, Sir Peter captured the interest and attention of all around him. But then he is the Chairman of ITV and knows more than most about what it takes to put on a good show. He didn’t disappoint. In our interview with him before taking to the stage, Sir Peter talked about the changing media landscape, diversity in the creative sector and how he has overcome some of the many challenges he has faced in his career.

Sir Peter’s advice for other leaders: “However grim it looks, keep putting one foot in front of the other and keep going. Keep buggering on.”

Our first speaker after the Christmas break was a man who leads one of Europe’s largest newspaper publishing businesses, Reach Plc who include The Western Mail and Daily Mirror among their portfolio. Simon providing a fascinating insight into the state of the media industry right now and why he believes print still has a lot of life left in it, and how editors and journalists can join forces to combat the threat of ‘fake news’.

Simon’s key message: ““Mark Twain famously said that reports of my death have been greatly exaggerated, the same applies to print.”

READ REVIEW or LISTEN TO INTERVIEW

From advising the Cabinet and working with Sir Tim Berners-Lee, to serving as Principal of Jesus College Oxford and chairing the Open Data Institute, few can ever doubt the influence Professor Sir Nigel continues to have on technology today. Regarded as a true pioneer of computer science, he spoke to us about how automation will create more rather than cost jobs, and how the UK can (and will) retain its position as Europe’s leading tech hub in the post-Brexit era.

Professor Sir Nigel’s key message: “We’re very creative as a species, so whilst there may be some jobs lost to technology there will always be new professions and new types of work that we haven’t thought of yet.”

The Armed Forces are undergoing a change never seen before. Yet despite the challenges and obstacles that have deterred many people from choosing this as a career of choice, the Royal Air Force under Sir Stephen has led the way both in terms of recruitment and retention of new entrants, and diversity. Speaking with us in an interview before that evening’s event, Sir Stephen spoke of how the RAF has evolved, where it is now and what he hopes for its future.

Sir Stephen’s leadership advice: “Listen to intuition, don’t be captured by it. And remember, there is no higher priority than gripping our strategic work force challenges.”

When it comes to discussing Brexit and its potential impact on the Welsh and UK economy, few are as best-placed as Paul Donovan to lead the debate. As Global Chief Economist of UBS Global Wealth Management, Paul took time to be interviewed by the Club. He spoke of the sense of Brexit fatigue being felt by the nation, his fears for what a second referendum could mean for the UK itself, and the polarisation of opinion that has been propagated by the media’s thirst for sensationalism.

Paul’s key message: “Economists can prove that the media has become more sensationalist in recent years. [But] ordinary people in the day to day course of their business have other things to worry about and other things to focus their attention on.”

For over 30 years, Nick Wheeler has run what has become one of the UK’s most formidable retailers. But it wasn’t all plain sailing, far from it. Having almost gone bust on two occasions, Charles Tyrwhitt Shirts – Nick’s two middle names – has experienced its fair share of challenges over the years. In our interview with him, Nick told us how he overcame these obstacles, what keeps him motivated three decades after starting the business, and the importance of giving back to the community.

Nick’s lessons in leadership: “To make a business work you have to be good and to make it work well you have to be the best. If you focus on one thing and you try your hardest to be the absolute best at that one thing – you’re going to have much more chance.”