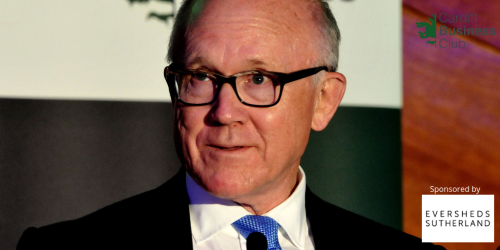 On Tuesday 2nd July the Club hosted the final event of the season, when we were joined by Robert ‘Woody’ Johnson, US Ambassador to the UK event, which was kindly sponsored by Eversheds Sutherland.

Ambassador Johnson has an extensive professional background, having served for 30 years as the Chairman and CEO of The Johnson Company and since 2000 as the Chairman and CEO of the New York Jets football team, and New York Jets Foundation. The Ambassador also has a philanthropic side and is the Founding Chairman of the Lupus Research Alliance, whilst working for many years with the Juvenile Diabetes Research Foundation.

Addressing the Club, the Ambassador was keen to draw on the close bond between the US and the UK and spoke of his optimism over the likelihood of a free trade deal following the outcome of Brexit. He said: “President Trump has outlined his desire to have a free trade agreement with the UK, and I see it happening.

“These things can be complicated, but they can also be incredibly simple if you want to get things done.”

In Wales, he said, there are around 50,000-60,000 Welsh jobs that ae currently being supported by American owned firm. This makes the US Wales’ “biggest investor after the European Union” – something that both he and President Trump are keen to maintain and build upon.

After a deliberately short speech, Ambassador Johnson opened the room to some questions from attendees – the first of which was on how the skills of a business leader are different to that of an Ambassador, if at all?

“The roles are different in some ways,” replied the Ambassador, “but business is primarily objective-driven. You have wins and losses and quantify your success with money. With diplomacy, it’s not so easy to have a score sheet.

“This is one of the things I am trying to transfer from my business background to my Ambassadorial role. We are looking to set individual objectives so that each department can track their progress - it’s similar to business in the sense that everybody pulls their weight.”

On the assumption that the UK leaves the EU as planned this coming autumn, one attendee asked how will the US redefine its relationships with the UK? “In all honesty, I don’t think it needs redefining.

“Once we have a free trade agreement, business will be fast and furious. There will be a lot of opportunity coming the UK’s way when it is a sovereign state. America is extremely optimistic about the outcome of Brexit - the UK has the talent to navigate it in the correct way.”

There is no doubting that President Trump is an interesting character, and one member of the Club was interested to hear Mr Johnson’s thoughts on whether his Commander in Chief will stand for another term or re-enter the “grubby “business world? The response from Mr Johnson was perhaps predictable: “[President Trump] will most certainly win his next term.”

He added: “In football, if you lose a game on Sunday, there is a brief period where you feel depressed, but the next day, you have to have your game plan ready. It’s the same with the players, the coach, the fans - but this period must remain short. I will approach fans the following week and ask them ‘are you going to win today, and they reply, ‘Yes!’

“The President is similar in the sense that he accomplishes in a different style. You don’t learn to do what President Trump does in President school - he has a lot of balls.”

The final question from the floor was in relation to inward investment into Wales. According to a recent report by the Massachusetts Institute of Technology (MIT), Wales is set to be known for its compound semiconductor industry, FinTech and InsureTech sectors., So, what can we do to encourage further US interest in the Welsh economy?

Ambassador Johnson said: “When it comes to these types of businesses, the trick is to sell. Make yourself known. Come over to America and ask for it.

“The only way you can get new investment is to ask for it - it’s as simple as that.”